Due to pandemic situation, for the first time Mohun Bagan Day will be celebrated on digital platform worldwide.

Here’s Dr. Tridip Sheet explaining the importance of the day.

The day started with Mohun Bagan being displayed at the Nasdaq billboard. 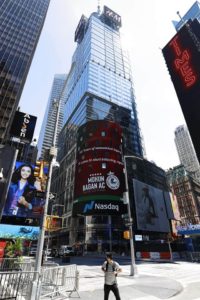 Mariners Abroad had a Live telecast with the fans before the billboard in their Facebook page.

The billboard as captured by Sudip Mitra –