During the last game,  some of the Mohun Bagan supporters were allegely profiled and harassed. Mohunbaganclub.com talks to the supporters , and comes up with their feelings. Unfortunately, those who were found harassing senior members and using cuss words during AGM, were found leading the show in harassing supporters. What happened exactly? 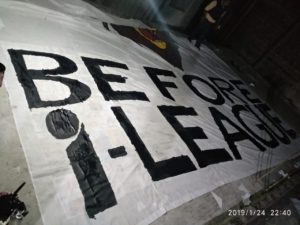 Tifo or huge sized banners, now a days are part of any kind of fans activities in all over the world. Kolkata Football fans are not exceptional, specially the supporters of two arch rivals. However, the officials released a press statement mentioning that ‘…carrying of any obscene/vulgur banners/flexes inside the stadium which are against the Indian culture will also be dealt strictly.’

To give a suitable reply of the East Bengal’s Tifo displayed in stadium on Dec 16, few fans club designed 6 Tifos, working last few days round the clock. The message on the Tifo’s were neither offensive- like, a cartoon of Lion and wet Cat before and after I League, a servant clad in red and yellow towel serving a cup of tea to his master sitting in couch, a drawing of locked up gate mocking with a lip. 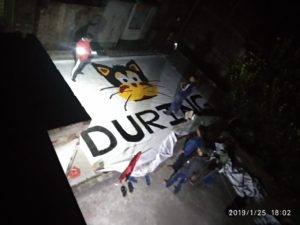 The supporters got due permission from an EC member of club, seek written permission from Bidhannagar City Police before the plan. However, on the day of the match, they moved from pillar to post, from Gate 1 as pre planned, to Gate 3. But the police stopped them at the gate, mentioning that cat, servant and kiss words are offensive to East Bengal. The Tifo sized were 7680 sq foot to 2400 sq ft.

To their utter display, East Bengal supporters were allowed with a giant size Tifo inside the stadium. Possibly this is the first time that a home ground supporters are not allowed to bring any Tifo whereas the away team supporters are allowed to bring banners and smoke bombs inside the gallery. To protest this, Mariners Base Camp, one of the premier fans’ forum for Mohun Bagan, along with few other fans clubs, has declared they will not do any kind of fans activities in the gallery for indefinite periods.

The reason for putting a strict ban on flex was, in couple of home match, an agitation took place named ‘Hok Protibad’ who displayed banner inside the stadium, demanding investor in Mohun Bagan club, which does not have any professional sponsor for last 4 season. Was the promises made during election campaigns “jumlas” – one wonders. But one is not surprised as misrule rules.