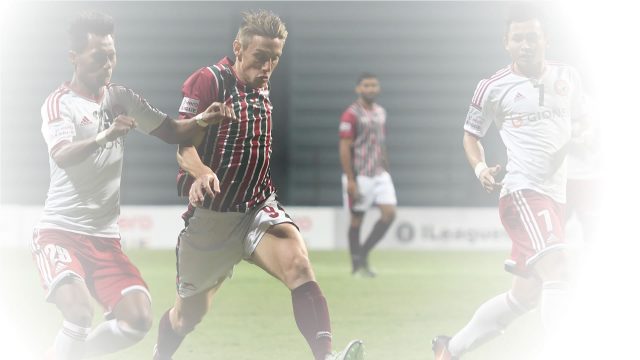 Score line reads 3-2 for Bagan. Makes it sound like a thrilling encounter. Thrilling though it was, with the score line tilting balance frequently, it did send down a few chills down the Bagan spine, and left a lot of questions to be answered for.

Bagan started off in style, with Katsumi running down the left and serving a precise cross for Duffy to score with an immaculate header as early as the 2nd minute. Both the skipper and Duffy seemed to be calming down the celebrations of their teammates after the goal, almost as if they knew what was to come.

Complacency perhaps did creep in, and the Bagan defensive line was caught at fault several times, with the 3 defenders caught in a straight line on multiple occasions when the Aizwal wingers attacked from the flanks.

Aizwal’s Jayesh Rane equalized from a such attempt, and the Bagan defenders were clearly at fault with the school boy error of everyone falling in the same line.

Aizwal continued to attack in the 2nd time with a few attempts at goal. While the Bagan wings seemed to be active with both Prabir Das and Katsumi running down the side, it was the 63rd minute when Man of the Match Prabir Das was finally able to nicely place one for Jeje to tap the 2nd goal in.

Joy was shortlived, whith Asutosh Mehta making it 2-2 in the 69th minute off a header. The defenders as well as the keeper Debjit could and should have done better.

Tempers and cards flashed, with players from both sides picking up a few cards.

Souvik came in around the 80th minute for Bikramjit, and almost immediately after fed a ball with accuracy for Katsumi, who ran down the left to be felled by the same Asutosh who had scored for Aizawal.

Penalty it was, and the Scottish marksman Duffy kept his calm to convert the penalty to finish the game 3-2 for Bagan.

Some signs didnt augur well for Bagan. The defenders lacked cohesion and are perhaps not talking to each other. Else, the defense line wouldnt have looked so disarrayed so many times. Defenders need to talk to Debjit as well. Debjit made a few bad judgment calls on few of his outings leaving the goal mouth wide open.

Bagan are now 2nd in the table, right after East Bengal, whom they meet on Feb 12th after the AFC Cup home game with Colombo FC on the 7th.

Sanjay Sen has a lot of work to do to bring the team back to what it deserves to be. Other teams may not fail to capitalize on the mistakes that the Bagan defenders made today..

Of course, we still have the 500 rupee note question – when is Sony Norde coming back?