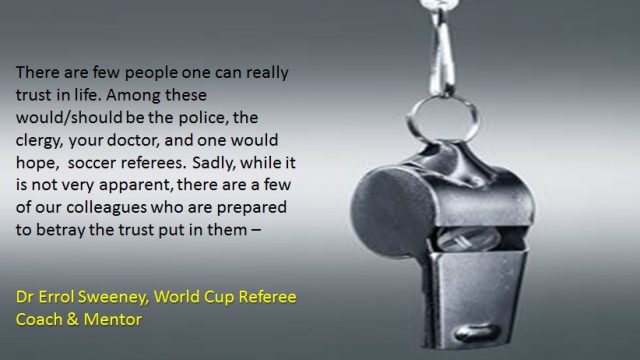 Can the fans expect neutral refereeing?

Mohun Bagan has suffered a lot from refereeing , particularly some crucial matches in last few years. Incidentally not just Mohun Bagan, other iLeague clubs also were subject to refereeing errors, and it was allegedly found that only two clubs were benefited, one of them have withdrawn their team.

Dr Errol Sweeney, World Cup Referee Coach & Mentor, once said ” There are few people one can really trust in life. Among these would/should be the police, the clergy, your doctor, and one would hope, soccer referees. Sadly, while it is not very apparent, there are a few of our colleagues who are prepared to betray the trust put in them. ”

Unfortunately while likes of Zico, Robarto Carlos, the world cup winners , have criticized Indian refereeing, the referees were patted well by the football officials of the country instead of asking them to improve.

Serious questions have been raised for a particular referee and his abilities in the football ground. Questions are been raised on his biased approach towards various teams, and then when the said referee is selected for crucial iLeague matches , it is obvious that eyebrows will be raised.

FIFA or AFC should not shed their responsibilities as well. They should ensure proper anti-corruption guidelines are followed to ensure neutrality of refereeing in Indian football. Questions are been raised whether FIFA is having an eye towards the same or not.