Documentary on Mohun Bagan by Doordarshan

There was a title song sung by Devdas/Parineeta fame artist, Mr. Raghav Chattopadhyay, music given by Mr.
Kalyan Sen Barat on the lyric of Mr. Avijeet Sarkar. The lyrics was indeed a very, very attractive lyric that has been penned by Mr. Sarkar as ” Sabuj a Merun a Ki Uchchhas “. Overall the song was very good and matched perfectly with the spirits of Mohun Bagan.

A tremendous narration was given by inimitable voice, our super star of silver screen, Mr. Saumitra Chattapadhyay, who himself is a real Mohunbagani. A special thanks should have gone to the Information Bureau of West Benagal Government for providing clippings of some of Mohun Bagan’s matches/activities when there was no TV. Also, the
noted journalist Mr. Moti Nandy provided some narrations on some glorious past of MB, during its earlier years.

Mr. Moti Nandi told about the glorious past of MB in the initial years including the historic 1911 Shield winning. He told how Bengalis as well as non Bengali Indians, irrespective of their caste, religion, and language supported MB in the football ground when MB fought against any English team. He also told how MB was a symbol of Indian freedom movement. We came to know that in Traders Cup, MB beat Dalhousie, Calcutta Club etc in big margin in those days, that was a tremendous result. MB players were playing bare footed against English men’s boot. Mr. Amal Dutta told that in India, MB has the maximum number of supporters in comparison with other clubs. Other personalities told how they used to be motivated by MB.

Some old/nostalgic clippings were shown as under: –

1) Some clippings of MB’s 75 years of platinum jubilee celebration. The said celebration took place for continuous 75 days. There was a huge program of sports including football, hockey, cricket, athletics, tennis etc. The then top club Hungarian Tatabania Football Team came to play with MB and the match was held on MB ground.

2) In Athletics, noted gold medal winner athletes from East Germany participated and the event was held on MB ground.

4) In Cricket, there was an invitation match between the Commonwealth XI led by Mansur Ali Khan Pataudi and World XI led by Sir Garfield Sobers. The match was held in Eden Gardens.

It was a grand celebration for 75 days, no other club in India could stage such a celebration.

6) Some clippings of the Historic match against Cosmos, led by world’s most famous and legendary footballer, Pele held on 24.9.1977 at the Eden Gardens were shown. The ambience and gathering at the Eden Gardens was awesome, the full credit has gone to our beloved late General Secretary Mr. Dhiren Dey. The match ended in 2-2. Mohun Bagan was leading 2-1 after Cosmos took the early lead. The late equalizer came from Cosmos via penalty.

8) Some clippings of MB matches, where MB could beat their arch rival, EB in Fed Cup, NFL etc were shown. The pictures of Green and Maroon flags in gallery with fans cheering up were most enjoyable. Snap of the famous backvolley goal by Shyam Thapa was shown.

9) Mohun Bagan is the only club in India, in whose centenary celebration in 1989, a first day cover stamp was issued from the Indian Post and Telegraph Department, which was indeed a great honour.

10) In 1989, holy Ganges water was brought into club tent from the pilgrimage, Hardwar.

12) Mr. Manna Dey told us stories about his fight with Mr. S. D. Burman regarding Mohunbagan-East Bengal. He also told us that the Megastar Mr. Amitava Bachchan himself is also a Mohunbagani.

13) On silver screen also, Mohun Bagan’s name has come all along, all times e.g. Film “Dhanni Meye”, where we see that in the morning after praying to God, Uttam Kumar was seen praying before the images of Sibdas Bhaduri, Gosto Paul etc ( though Uttam and Ray were also blind MB fans ) Ray’s film Jana Arannya and others etc. etc.

14) In those days, Mr. Dhiren Dey handed over Rs. 50000 as donation to our then chief minister Late Dr. Bidhan Roy, he also donated money to the then prime minister late Jawaharlal Nehru etc.

In addition, there was also interviews from our rival camps, like Mr. Kalyan Majumder, ex-footballer Mr. Bomkesh Basu etc. Even they have acknowledged the status, spirit, culture, MB’s ” freedom fighting ” on the football ground etc. The statement of Mr. Basu that “The status of the members of Mohun Bagan Club were much higher than us” is noteworthy.

We also came to know from the program that in India only there are many names of roads on Mohun Bagan footballers, like Gosto Pal, Sailen Manna, Sibdas Bhaduri, Umapati Kumar, Kirti Mitra also there is a road itself named by Mohun Bagan lane. It is a unique fact and incomparable in India.

Overall the program was a successful one, though few other clipping could have been added like the Akbar goal, 1976 triumph of Mariners etc.

Indeed a great tribute shown to The National Club of India. Thanks Doordarshan.
SOME EXCLUSIVE PICTURES FROM THE PROGRAM: 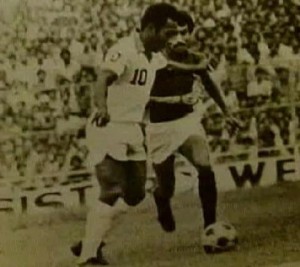 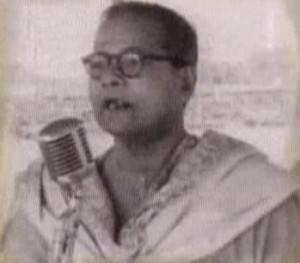 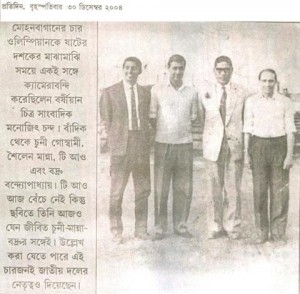 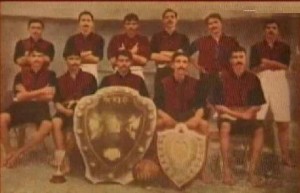 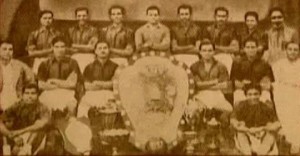 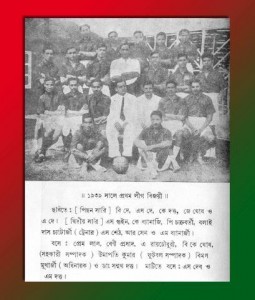 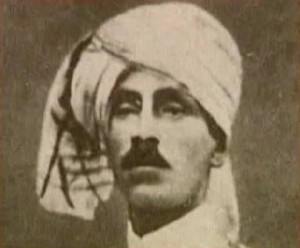 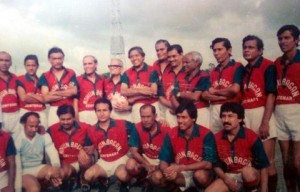 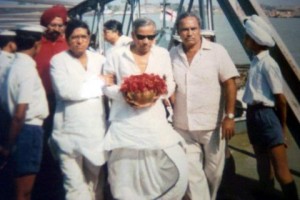 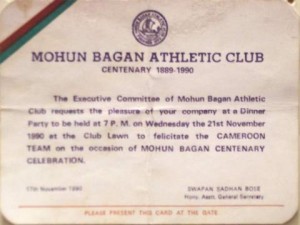 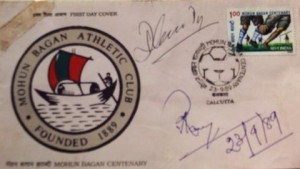