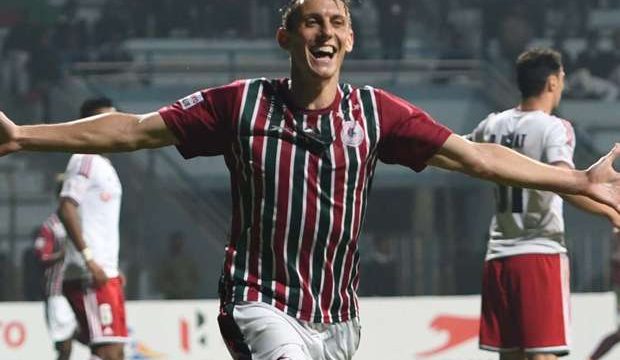 Duffy back in action

Mohun Bagan wins the second game of the iLeague after Darryl Duffy scored one goal each in each half to become Hero of the Match. Duffy’s goals were apt and showed his attitude within the box. He also played well on the right side and made quite a few moves.

Bagan had a new defense today and Souvik Ghosh came back to starting XI after a long gap. However Kingshuk and Anas did well to ensure Lajong does not find goals. Debjit also saved two goals. Pritam did well to overlap and come down and defend.

Sehnaz led the midfield well, Souvik also made the midfield compact , but he missed few opportunities. Raynier played for Bagan for the first time and was quite impressive.

Balwant and Duffy created some panic in the box, and for the second goal Duffy scored when Balwant was blocked.

However, Yusa still has opportunities of improvements.

However, Rowan continues to show the worth of Indian referees. Duffy once was fouled inside the box, which any “good and able” referee will mark as a penalty, but Rowan gave foul against Duffy. Once a clear throw in was given against Bagan. Yusa and Duffy were fouled many times and Rowan ignored.

The only decision where Rowan was right was perhaps booking Pronay after Pronay fouled a Lajong player unnecessarily.