THE HISTORICAL TRIUMPH OF 1911 IFA SHIELD 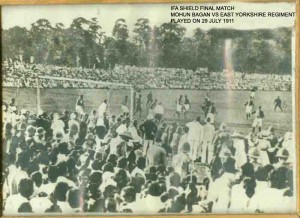 Mohun Bagan was the first Indian team and the first Asian team to have defeated a foreign team when they won the 1911 IFA Shield defeating East Yorkshire Regiment 2-1.We all have heard about Mohun Bagan defeating East Yorkshire Regiment in 1911 to lift the IFA Shield. But few know the whole story behind it.
In honour of this historic victory, the ” Manoshi ” magazine came up with a song on Mohun Bagan, which became a common tune in the lips of all Indians .

It was the last week of the month of July in the year 1911. It marked a mass up rival of the Indian natives against the British regime. Before this “National Association” & even Mohun Bagan had defeated some British teams to win local tournaments like the Trades Cup , but there were no major British teams in those tournaments. Thus winning the Shield was a matter of great privilege . It was the clarion call of a golden dream .Mohun Bagan had defeated heavy weight teams like St. Xavier’s (3-0), Rangers (2-1), Rifle Brigade(1-0) & Middlesex Regiment(1-1;3-0) to reach the final. At this stage all the Bengali youths were rejuvenated with undaunted spirits . The Bombay paper- “The Times of India Illustrated Weekly” reported that ” Thursday & Friday were the proudest day of the Bengalis life . That the barefooted Bagan boys were defeating the foreign teams was the only discussion in the trams, buses & among the office ‘Babus’ ” . On the other hand the Britishers were not at all amused at these events . On 4th August 1911, the ‘ Hitabadi ‘ magazine reported that ” on the evening after the semi-final was over , an Indian passenger asked his co British passenger the score of the match . In return he got a tight slap! ”
29th July .1911 . It was the Independence Day of Bengali Football .Thousands of people thronged from far away Patna ,Purnia ,Kishanganj,Assam & Dhaka to watch the match . On the day of the game at 11:00 am , the ” Calcutta Football Club” brought about 10 thousand people around the ground. Such intense was the atmosphere that the ” Bangiya Sahitya Parsad ” had to postpone their scheduled condolence meeting of Indranath Bandopadhyay.Estiamting a huge turnout the East Indian Railway arranged for special trains from Burdwan to Ranaghat. Special Steamers were arranged to bring people from Rayganj & Baranagar. All trams from Shyambajar & Chitpur were extremely crowded. Traffic jams were created near the High Court & Strand Road.
It was perhaps in 1911 that the first Illegal tickets (black tickets) were sold in Bengal. On the match day , a 2 rupee ticket soar to Rs.15 . Coolies were charging about 50 paise to 2 Rs. to run errands.(This was a huge money in those days). The ” Pioneer” reported that ” A boiled potato costed 1 paise & paan was 1 anna !! ” About 80 thousand to 100,000 people were there in the maidan to watch the game. One side was filled up with the Calcutta Babus & the other side by the Smith Company. The rest was like black sea waves showcasing the heads of the people. Everybody wanted only one thing. -The victory of Mohun Bagan. There was not an iota of space even on the treetops, telegraph posts & roof topped houses.The British civilians were quite vociferous too ! They had come prepared with effigies of Mohun Bagan & the Shield. “Reuters” reported that “the magnitude of the crowd was so large that the scorers & announcers couldn’t work. The scores were being broadcasted in the form of KITES in the sky !!!! ” The ” Empire ” magazine even setup a temporary Telephone Exchange on the spot !!!
On the morning of the match day, the Mohun Bagan players went to Kalighat temple to seek blessings of ‘KALI’- the goddess of Power. With Red Tilaks on their foreheads the Mohun Bagan players stepped in the pitch one by one . They were :

( The Immortal XI )
The ground was hard and dry. A very pacy game commenced. The barefooted Bagan players matched their Britsh counterparts in every aspect of the game. Each long ball from the Regiment players received loud clapping from the English ladies , & simultaneously every counter attack of Mohun Bagan received thunderous applause from the crowd.
Suddenly Jackson of East Yorkshire regiment scored from a free kick. The English ladies started to burn the effigies of Mohun Bagan.Black KITES filled the maidan skies. East Yorkshire-1 . Mohun Bagan -0
Bagan started afresh with renewed zeal after the breather. Within 20 mins Capt. Sibdas Bhaduri restored parity. Amidst high voltage cheers from the crowd the Green’ Maroon KITES filled the skies !!
It was the 87th min. Abhilash Ghosh received a pass from the captain, & his powerful shot went straight into the goal !
Within a few seconds the whole of Kolkata was filled with thunderbolt like crackers. It started to rain in shirts, sticks ,shoes within the ground. The Englishmen made a hasty exit. Cries of ” Bande Mataram” & “Mohun Bagan ki Jay” ( Hail Mohun Bagan) filled the skies.
It is said that when the team was returning to the club with the Shield, a Brahmin pointed to the Union Jack atop the Fort William & asked – ” When will that come down ? ” Somebody replied that ” It will come down when Mohun Bagan will win the shield again.”
It may be a coincidence , but Bagan won their next shield in 1947 – the year of Indian Independence. !!!!
The players were taken on a public procession atop a Horse driven carriage. Both Hindus & Muslims came out with band parites.The procession reached Wellington Square after evening ! Ladies in the houses blew their conchs & lit their ‘diyas’ ( lamps) in honor of the brave lads.
After a full round of the city followed by innumerable fans , the procession came to a halt near the house of Club Supervisor-Sailen Basu.
The whole night of Kolkata was bathed in lights . Only Chowringee Square remained dark. It was the Sahib Para ( British Locality) of Kolkata.
The next day was almost celebrated a National Festival. Huge feasts were held in many places including the house of Sailen Bose.Jalsa( song & dance) & fetes filled the city. The famous drama – “Bhisma Vijay” was enacted in honor of the victorious team !!
In England – London Reuters , The Daily Mail , London Times. The Manchester Guardian , Singapore Free Press all acknowledged & congratulated Mohun Bagan. The Indian – Amrita Bazar Patrika christened the team as ” Immortal XI “. The Statesman & The Englishman did the same. The Empire reported – ” All honors to Mohun Bagan. Those XI players are not only a glory to themselves ,but the whole nation deserves the billing ”
The Aftermath:
Standard Cycle Company( 59 Harrison Road) started to give free posters of the Mohun Bagan team with their products. About 100,000 copies were sold ! Merrs. Hald & Chat (Halder & Chatterjee) reduced their wares by 50% for all Mohun Bagan members !! The Great National Theatre advertised the ‘Baji Rao’ play as : “Mohun Bagan wins the Shield, Bajirao is the victorious !
Achinta Kumar Sengupta in his ‘ Kollol Jug’ said ” Mohun Bagan is not a football team. It is a tortured country, rolling in the dust, which has just started to rise its head.”
1911 IFA Shield still stirs the memory of the football lovers. The National Pride was churned up in the wrap of a football game. The dusk after 1857 Sipoy Mutiny reappeared as the golden new dawn in 1911 . 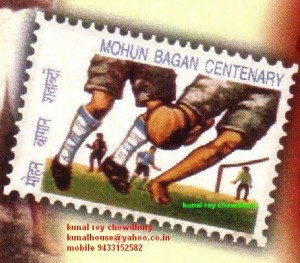 A postage stamp had been published by Govt of India in 1989 remembering the 1911 Victory of Mohun Bagan Athletic club. It is to be noted that Indian Nationalism has got a boost after this win. Govt of India honoured the Mohun Bagan Athletic Club and it’s immortal eleven for the fight for an oppressed country. This is the only postage stamp in India that has been published for a Club. It is that moment when Mohun Bagan has been announced as the National Club of India.