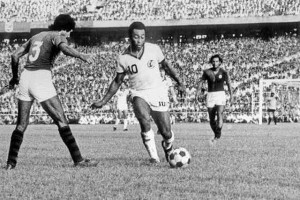 Mohun Bagan’s illustrious history is a veritable cornucopia of unforgettable memories. Amidst this treasure-trove of golden moments, a cynosure of attraction is the famous Mohun Bagan vs Cosmos match, which featured Pele, arguably the greatest player the game has ever produced. Mohun Bagan is the only Indian club to have the rare and historic distinction of playing against the legendary Pele, that too on home soil. Apart from Pele, great players like Cinnalia ,Miffin, Alberto, Roth ,Keith Eddie and Tonyfield also graced the occasion. This article takes you down the meandering lanes of history to the year 1977 and relives the euphoria surrounding Pele’s visit to Calcutta.

PROLOGUE
This memorable event in the history of Indian football was the result of the vision and indomitable zeal of Mr. Dhiren Dey.it was his long cherished dream to present Pele before the Indian spectators. Initial attempts on his part were scuppered by the Cosmos club authorities demand of a whooping 4 crore rupees for playing a match in India. Determined not to give up Mr Dey directly contacted Pele and urged him to don his jersey on Indian soil–a land where his name spelt magic and millions of people were crazy simply to catch a glimpse of him in action. This emotional appeal struck an responsive chord in Pele’s heart and he took upon himself the responsibility of convincing the club officials. After some dilly-dallying the Cosmos officials finally decided to send their star-studded team to play against Mohun Bagan.

The Air India aircraft carrying the Cosmos football team landed at the Dum Dum airport on 22nd.September,1977 at 11.15 p.m. A mammoth crowd ,the like of which Calcutta has never seen, gathered at the airport to accord a grand welcome to Pele.Conch shells and trumpets were blown as legions of football lovers gathered on either side of the route through which Pele was driven to his hotel(The Grand Hotel).A huge ocean of humanity congregated in front of the Grand Hotel and they went delirious with joy as Pele alighted from his vehicle. The mass hysteria that Pele’s visit generated remains unparalleled till date in Calcutta’s history. The warmth and love that people showered on Pele moved him deeply, and he remarked “What an amazing crowd!”.

It rained heavily on the 23rd. and it was widely feared that rain might play spoil-sport. Speculation was rife among sceptics that Pele might not play on the soggy Eden Gardens pitch. However, a great human being that he was Pele declared that nothing apart from an absolute meteorological calamity could prevent him from taking the field. The vibes surrounding his visit had carved a niche in Pele’s heart and he was determined not to let rain dampen the spirit.

THE MATCH
The 80,000 strong capacity crowd giving a thunderous ovation as the Cosmos and Mohun Bagan players took the field. The defining chant of “Pele Pele Pele” rent the air, as the referee blew his whistle to signal the start of the match. Fortunately the rain had held up but the ground was still slashy. Both teams started on a cautious note with occasional forays into the rival territory. One such move saw the Cosmos team opening the score. Cosmos drew first blood in the 17th. minute. A brilliant through ball from Pele split the Mohun Bagan defence and an overlapping Alberto tucked the ball into the net. However Mohun Bagan evened the score in the very next minute .Habib initiated a brilliant move, dribbling past a couple of Cosmos players and passed the ball to Akbar. Akbar evaded a diving tackle from Morais and gave the ball to Shyam Thapa whose brilliant punch found the net. The stadium erupted with delirious joy .P.K Banerjee ,the Mohun Bagan coach had deployed Goutam Sarkar as Pele’s marker. The match witnessed a mesmerizing duel between the two. On one occasion, Pele evaded Goutam Sarkar with an impeccable chest-trap and dribbled his way into the Mohun Bagan box. A desperate Shivaji Banerjee jumped full stretch to snatch the ball from Pele’s feet .In a rare gesture of true sportsmanship Pele jumped over the Mohun Bagan goalie into the Mohun Bagan net keeping Shivaji’s countenance intact in the process. This noble gesture drew a warm round of applause from the audience. In the 23rd. minute Akbar took a powerful 30 yard stinging long-ranger. The ball ricocheted off a diving Yesin, the Cosmos goalkeeper and landed before Habib who romped home with a powerful strike. Mohun Bagan shot ahead 2-1 much to the joy of the home crowd. In the dying moments of the first half Cosmos mounted pressure on the Mohun Bagan territory and nearly scored on two occasions. First, Pele took an enthralling 30 yard free-kick that curled viciously past the Mohun Bagan wall and brushed against the cross-piece. The trajectory of the ball left the audience spell-bound with amazement. On another occasion, Sivaji Banerjee pulled off a stupendous save to deny Cannilia who took a blinding shot at goal from close range. Thanks to Shivaji Banerjee, who guarded the Mohun Bagan citadel like a man possessed, Mohun Bagan led by the odd goal in three at half-time. Mohun Bagan made five substitutions in the second half and played a more defensive game. The game did not reach the same lofty heights that the first half witnessed. Pele took another brilliant free-kick in the second half. He gently chipped the ball over the Mohun Bagan wall to Cannilia who passed to Field. However Field failed to score from close range. In the 70th. minute Mohun Bagan conceded a penalty when a Sudhir Karmakar sliding tackle found the referee pointing to the dreaded spot. Cannilia made it 2-2 and the match ended at that score .The crowd walked back home replete with memories of a historic and momentous event in Indian football. The Mohun Bagan players played their hearts out against a formidable opponent comprising of legendary greats of the game and earned the kudos of one and all. The next day the Ananda Bazar Patrika, described Goutam Sarkar as “India’s very own Beckenbaur”.(Incidentally Beckenbaur was scheduled to play against Mohun Bagan but an ankle injury in the previous game prevented him from doing so.)

EPILOGUE
Mohun Bagan threw a banquet in the evening at Grand hotel in honour of the Cosmos players. On behalf of Mohun Bagan Chuni Goswami presented Pele with a glittering diamond ring. Pele praised the Mohun Bagan players effusively and commented that the hosts could have led 4-1 at half-time had they not bungled chances.He particularly showered praise on Goutam Sarkar,Subrata Bhattacharyya,Pradip Chowdhury,Habib,Bidesh Bose and Shivaji Banerjee.During the party,Pele gave an affectionate pat on Goutam Sarkar’s back and said: “You No.14 did not allow me to move”. On 25th.September,Pele bid adieu to Calcutta but left behind a treasure-trove of fond memories to cherish a life-time. This match marked the end of Pele’s contract with Cosmos. It was the penultimate match of Pele’s illustrious career. He played his last farewell match at New Jersey on 1st. October. Years later, during the 1990 World Cup Shyam Sunder Ghosh, a reporter of The Statesman asked Pele about his memories of the match. Pele reminisced: “I still remember Calcutta and also some memorable occasions, particularly goalkeeper Shivaji Banerjee who dived to save a goal on my feet which I could have scored. This incident was the best in Eden Gardens. “This match will always stand out as on of the brightest feathers in Mohun Bagan’s cap during its long and glorious history.