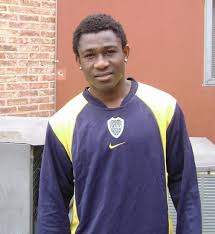 Mohun Bagan has closed the foreigner quota as Sony Norde becomes the 4th player of Foreign origin to sign for Bagan this season.

The Haitian player was in Bagan radar since the IFA Shield of the season 2013-14 and scored the all important goal against Bagan. Sony had      represented the National Squad for Haiti as well. The 24 years old has played for Argentina , Mexico and Bangladesh based clubs before joining    Mohun Bagan