Mohun Bagan fans @ Bangalore celebrated Mohun Bagan Day on 27th July 2014 in their own way. The supporters invited Noel Wilson for the event , and Noel happily accepted the invitation . Noel came down to “Play Mania” donning his Mohun Bagan jersey and participated in a friendly game between the mariners.

Later, Noel was handed over a small token of appreciation from the Mohun Bagan supporters at the Garden City, and he handed over the newly designed jerseys for the City based fan club to the members.  This was followed by Cutting of 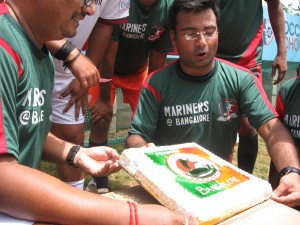